Axial Expansion Joints is the simplest form of expansion joint. A flexible element either with flange end or Butt Weld End to absorb any combination of three basic movements. i.e. Axial movement (Compression / Extension) in its longitudinal axial direction. Lateral deflection and Angular rotation can be accommodated. 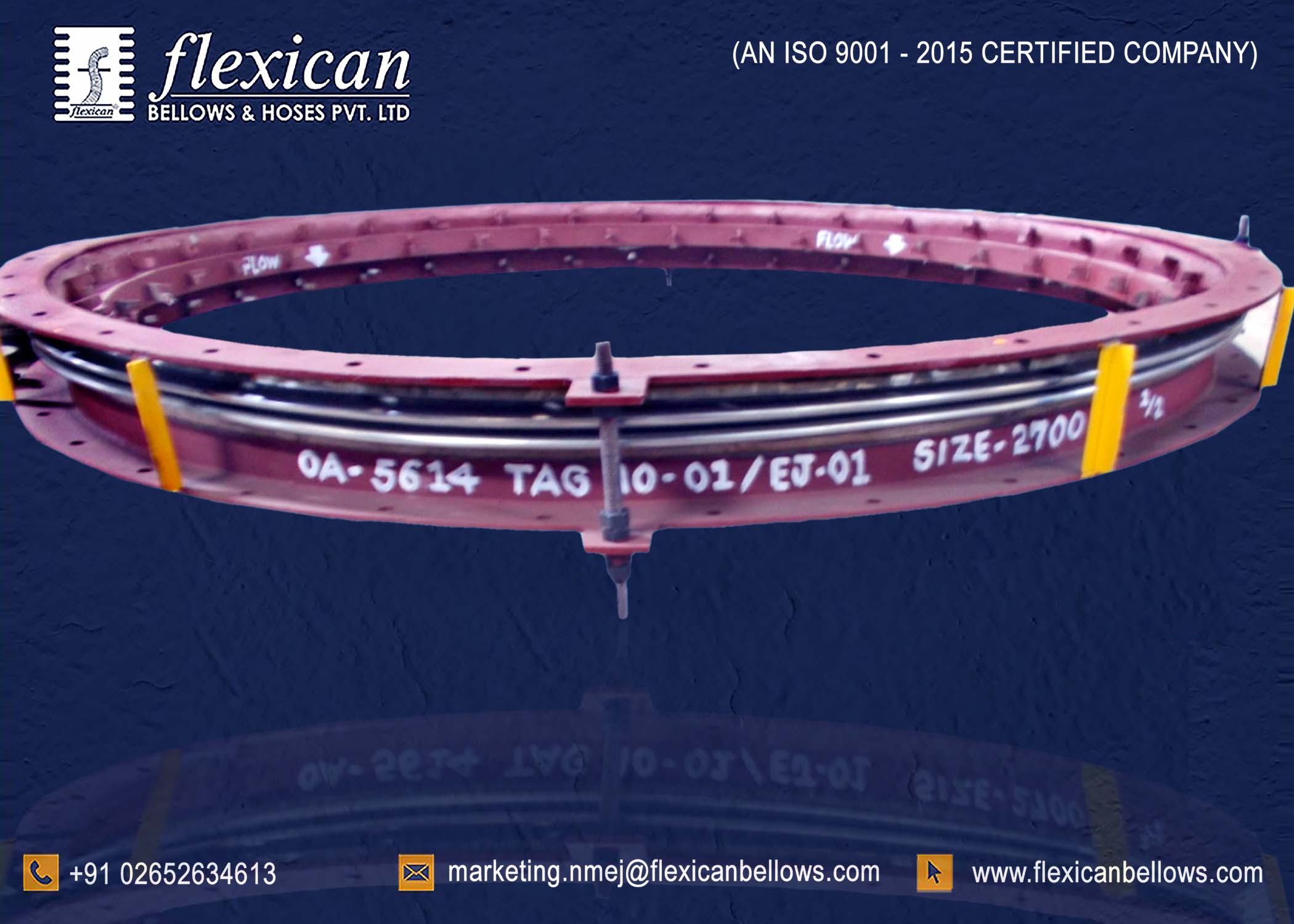 Hinged Bellows, either Axial or Universal type, are designed to absorb angular rotation in one plane only by the use of a pair of pins through hinge plates attached to the expansion bellows.

Hinged Expansion Bellows should be used in sets of 2 or 3 to function properly. Hinged Bellows are normally prevented by their design from deflecting axially, either an extension or compression. The hinge mechanism is usually designed to accept full pressure thrust and also shear loads such as from the weight of the adjacent piping, can be accepted by these type of expansion joints thereby doing away with provision of additional supports and anchors.

Hinged Bellows also have added benefits of positive control over the movements, eliminates pressure thrust forces, transmits external loads, prevents torsion on bellows and are the most efficient in absorbing of thermal deflections. 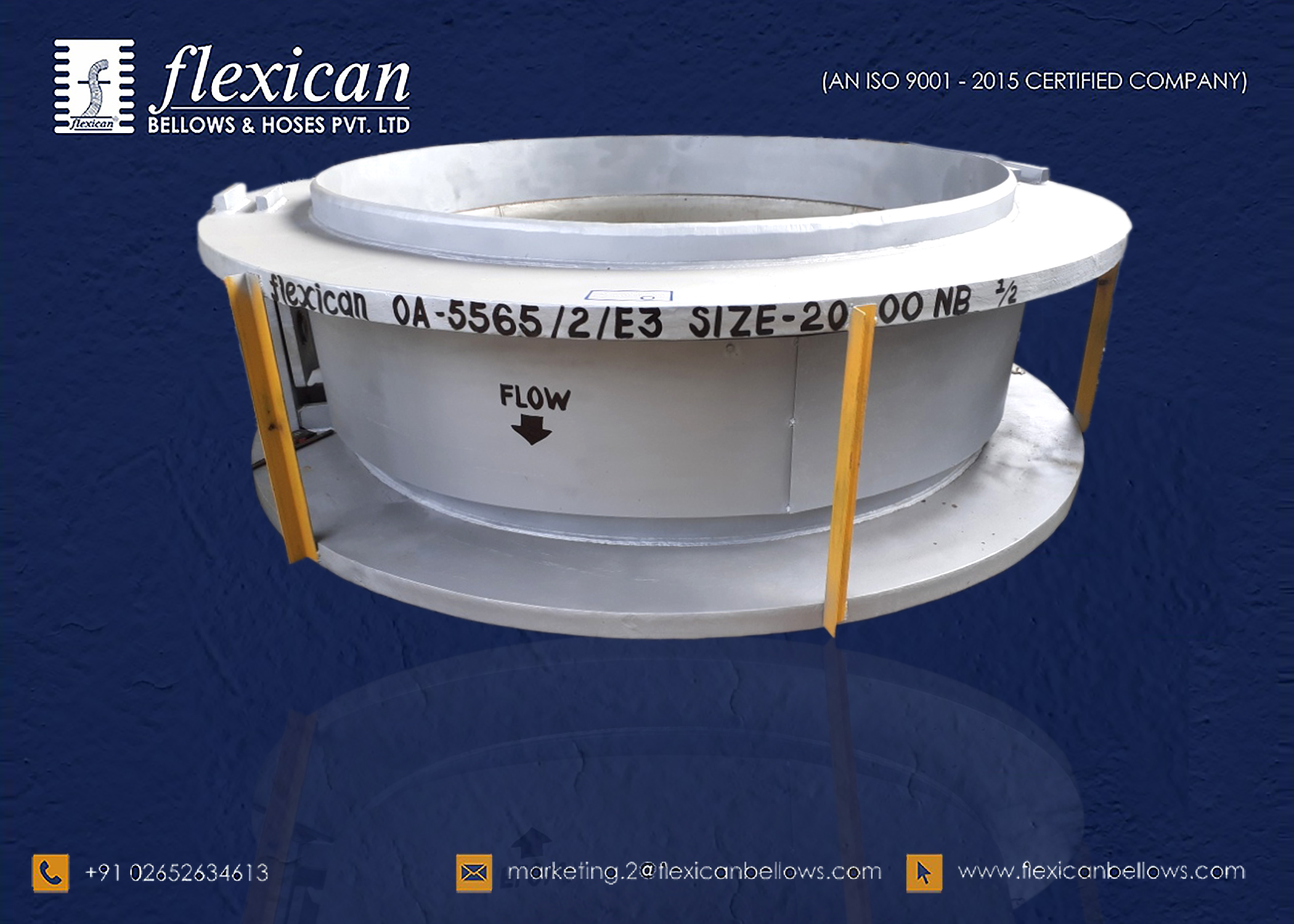 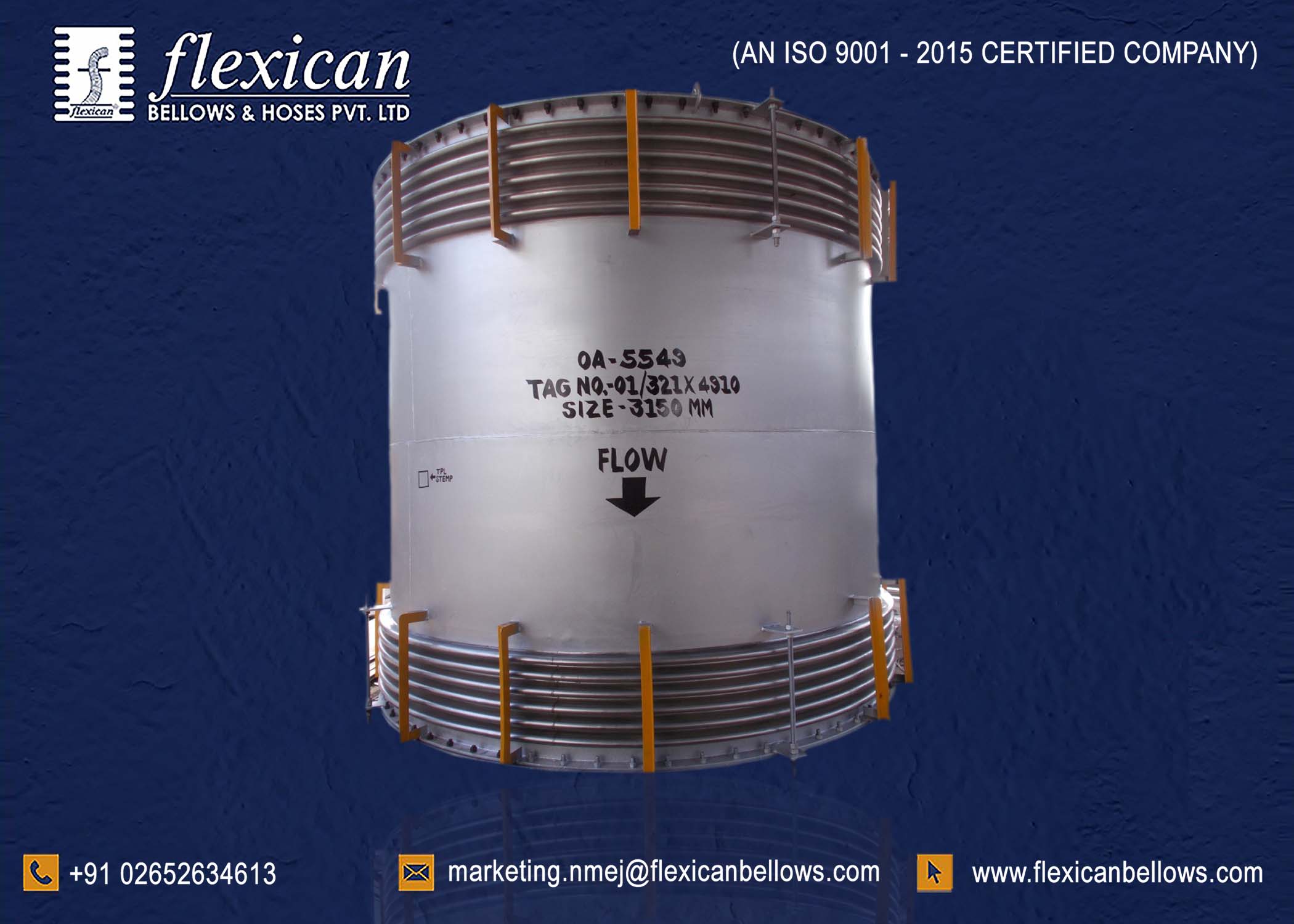 A single bellows and gimbal hardware designed to resist pressure thrust. The gimbal expansion joint hardware operates like the universal joint on a drive shaft to accommodate angular movements in any plane.

Universal Gimbaled Expansion Joints are similar to the hinged universals except that the two expansion joints are gimbal type. The advantage of this arrangement is the ability of the expansion joint to accept large lateral movements and independent angular movements in any plane.

It contains two hinge pins, the axis of each being perpendicular to the other. Each set of pins is connected to each other with a central gimbal ring. It provides similar restraint and resistance to axial forces such as the pressure thrust and to shear forces as the hinge type apart from having other features like absorbing angular rotation, preventing torsion on bellows and no main anchors required. 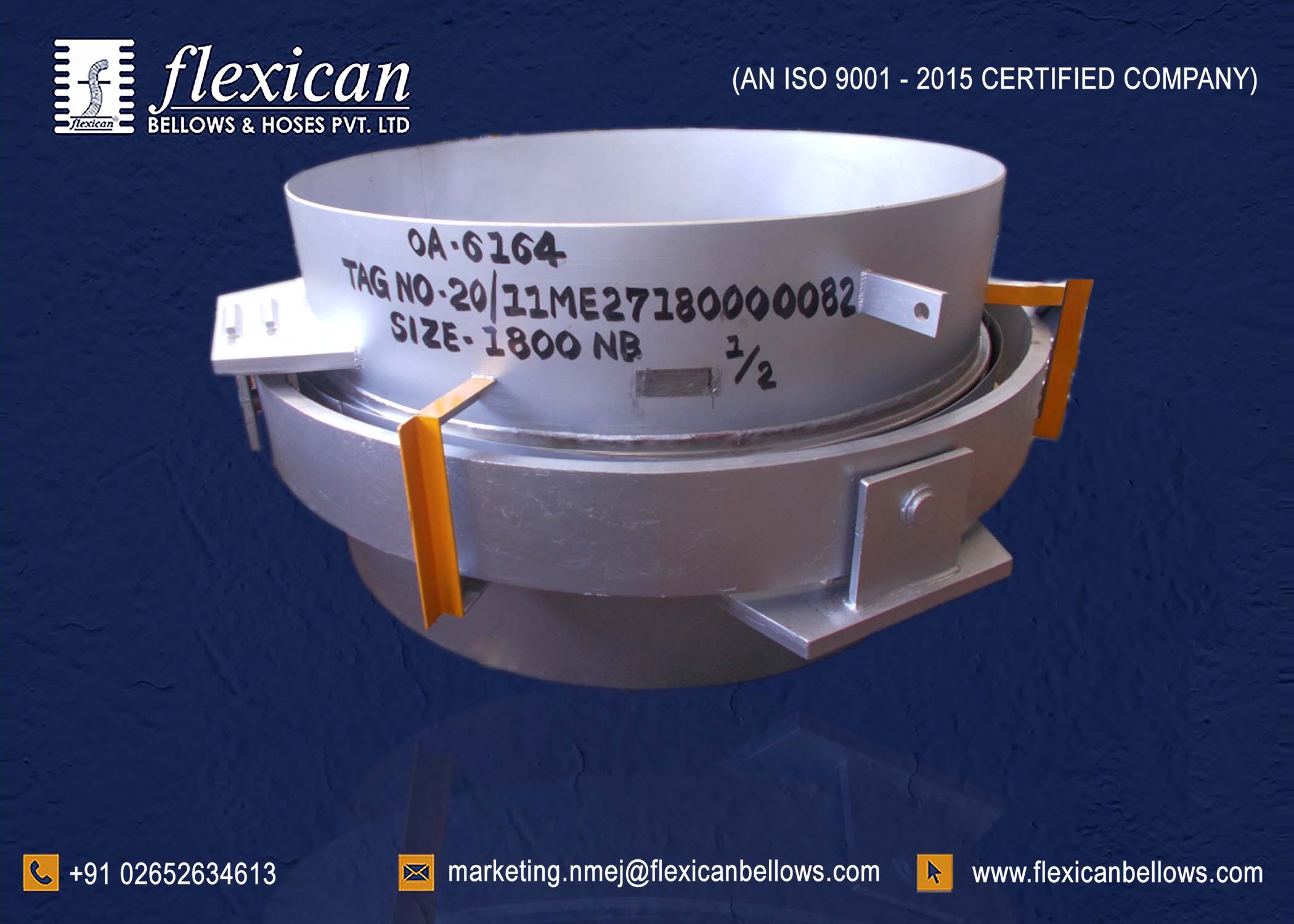 Rectangular joints are most commonly used in low pressure ducting to absorb thermal growth, the addition of flexibility in short runs, and as vibration absorbers adjacent to fans, blowers and other mechanical equipment. In general, they are used in the same manner as the corresponding circular joint.

The main features of these expansion joints are that they absorb axial and lateral movements, absorb displacements due to thermal expansion, balance pressure thrust remains constant and they eliminate main anchors.

The MOC can be designed in line with the duct MOC and in all types of materials as per customers requirements.

The sleeve can be designed to withstand the higher medium temperature – Directly exposed to the flow media. Slits can be provided at equal spaces to take care of the radial expansion happening across the sleeve due to high temperature.

Over and above, we stuff the gap between the sleeve and Bellow element with appropriate insulations, so that the temperature at the bellows are reduced and bellows life can be enhanced. 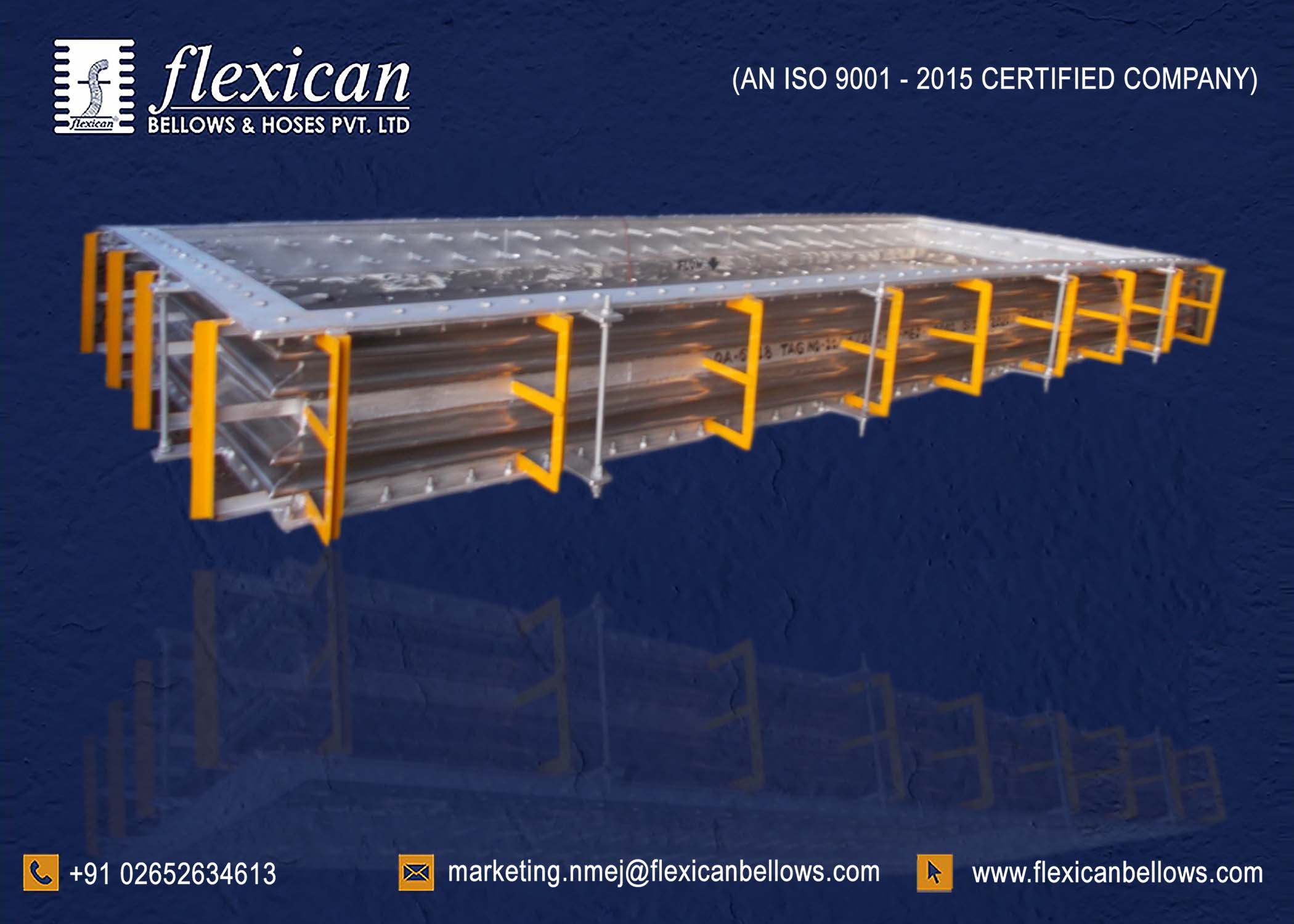 Oval type Expansion Joints are also most commonly used in low pressure ducting to absorb thermal growth, the addition of flexibility in short runs, and as vibration absorbers adjacent to fans, blowers and other mechanical equipment. In general, they are used in the same manner as the corresponding circular joint. 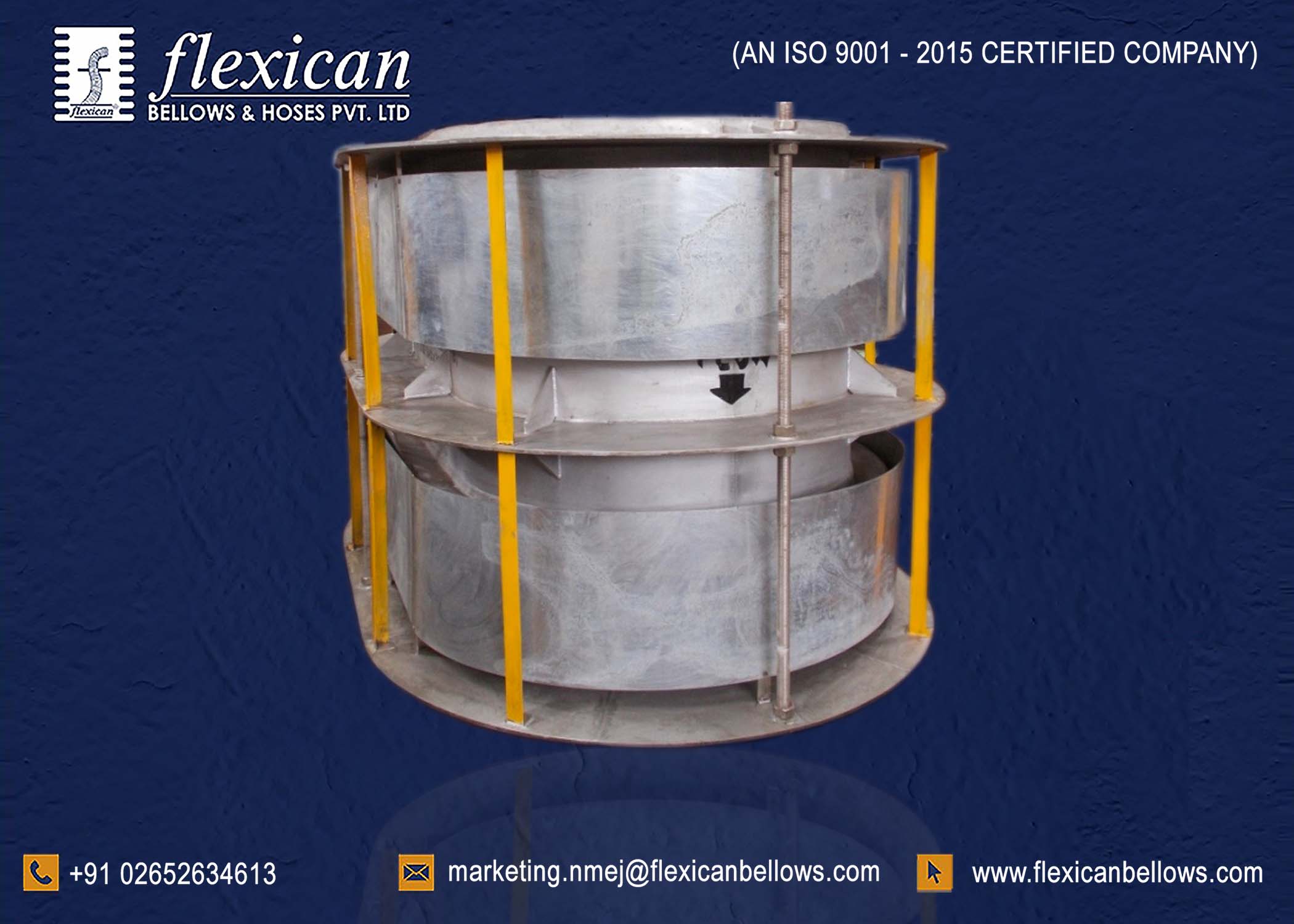 The designs of the hot blast mains along with the bustle pipe are to address system movements and residual expansions to give trouble free operation. The expansion joint system must be designed to accommodate thermal movements in the X, Y and Z directions of the stove branch connections, main and bustle.

We regularly manufacture & supply to major steel plants in India. 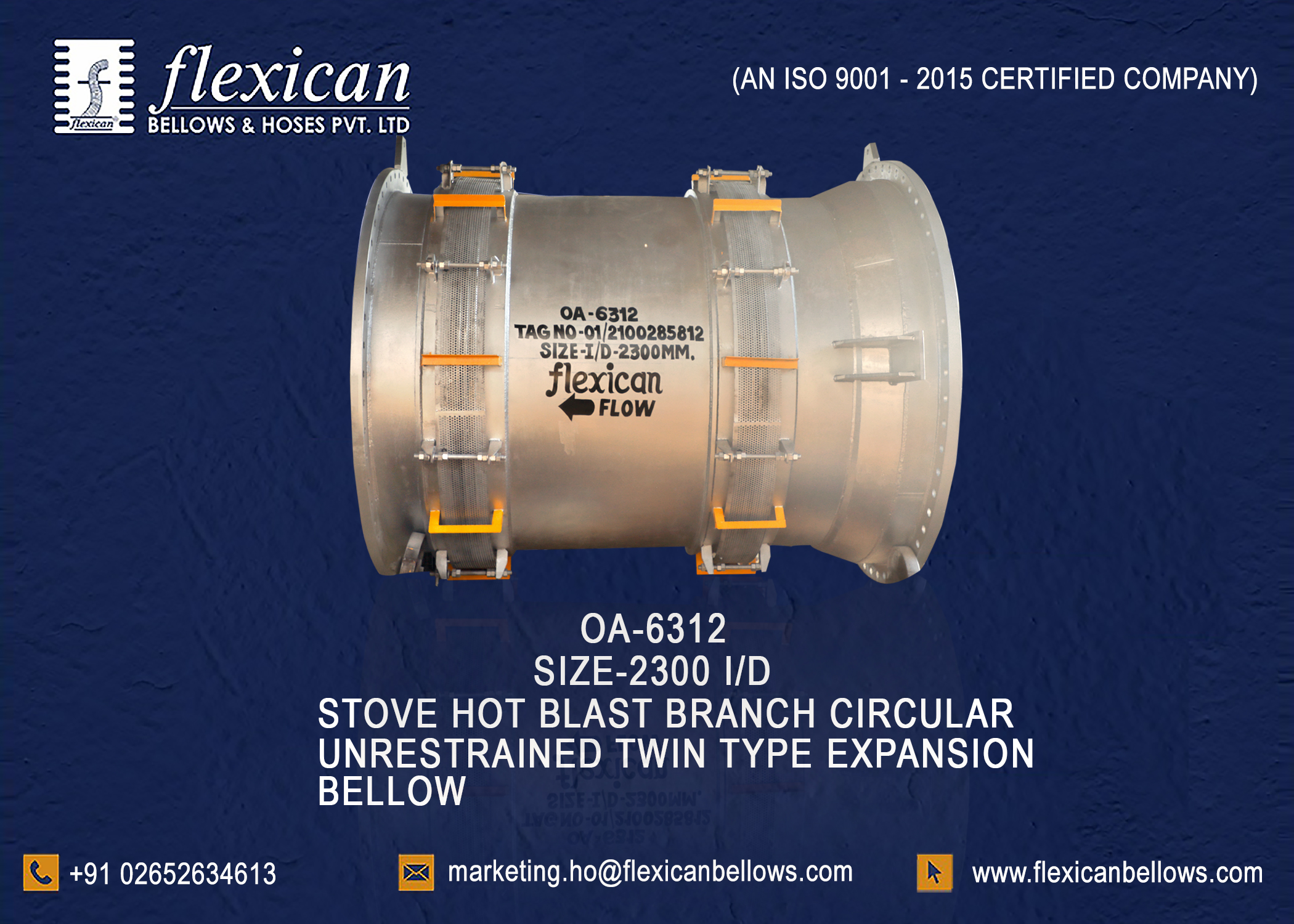 Tuyere stocks are generally designed for blast Furnace Stove to minimize joints and bends for improving the life of the refractory lining and minimizing pressure loss. The use of a horizontal jointing system, connected by means of quick release tapered wedges, facilitates quick and easy removal of blowpipe and elbow.

We regularly manufacture & supply to major steel plants in India. 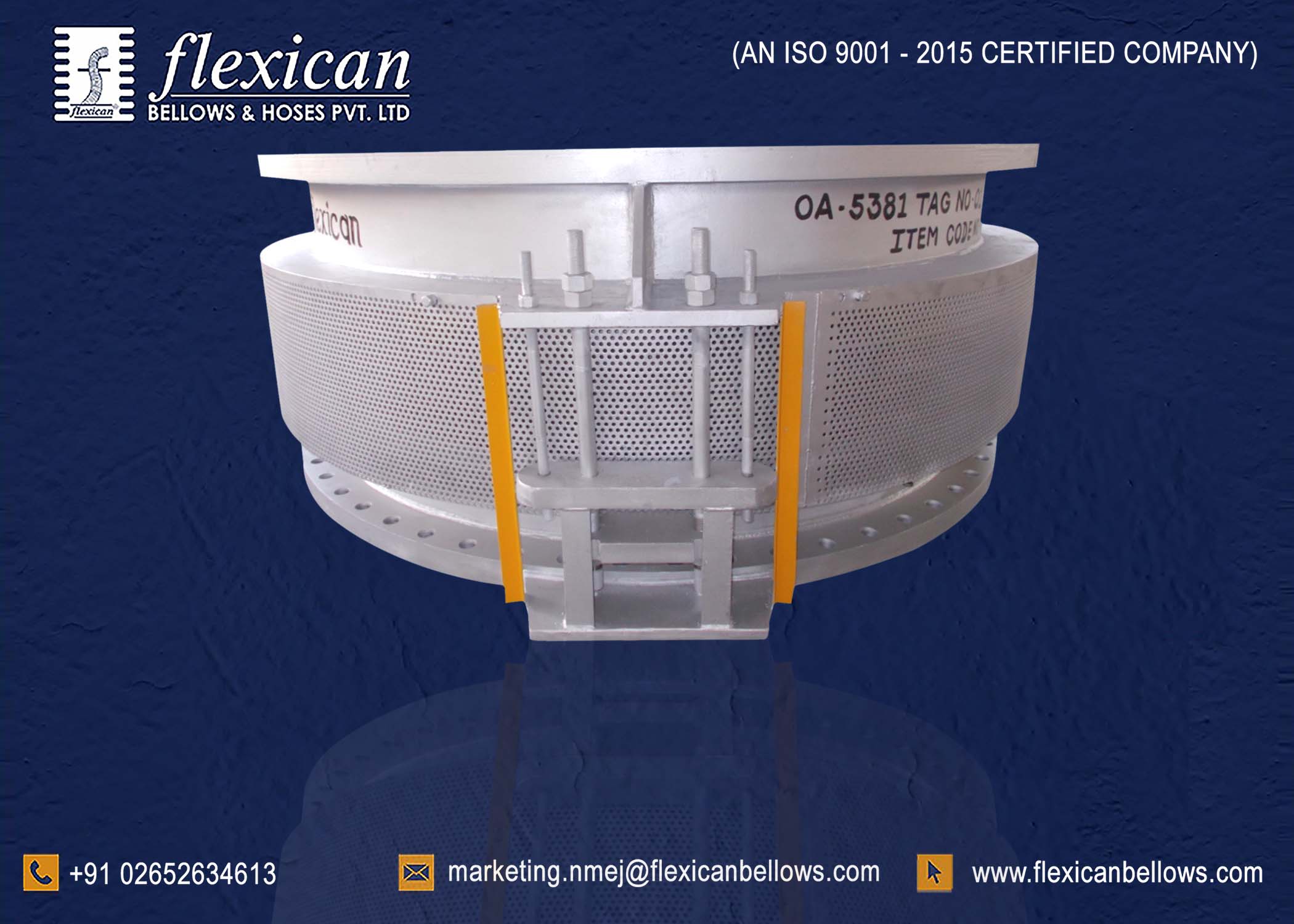 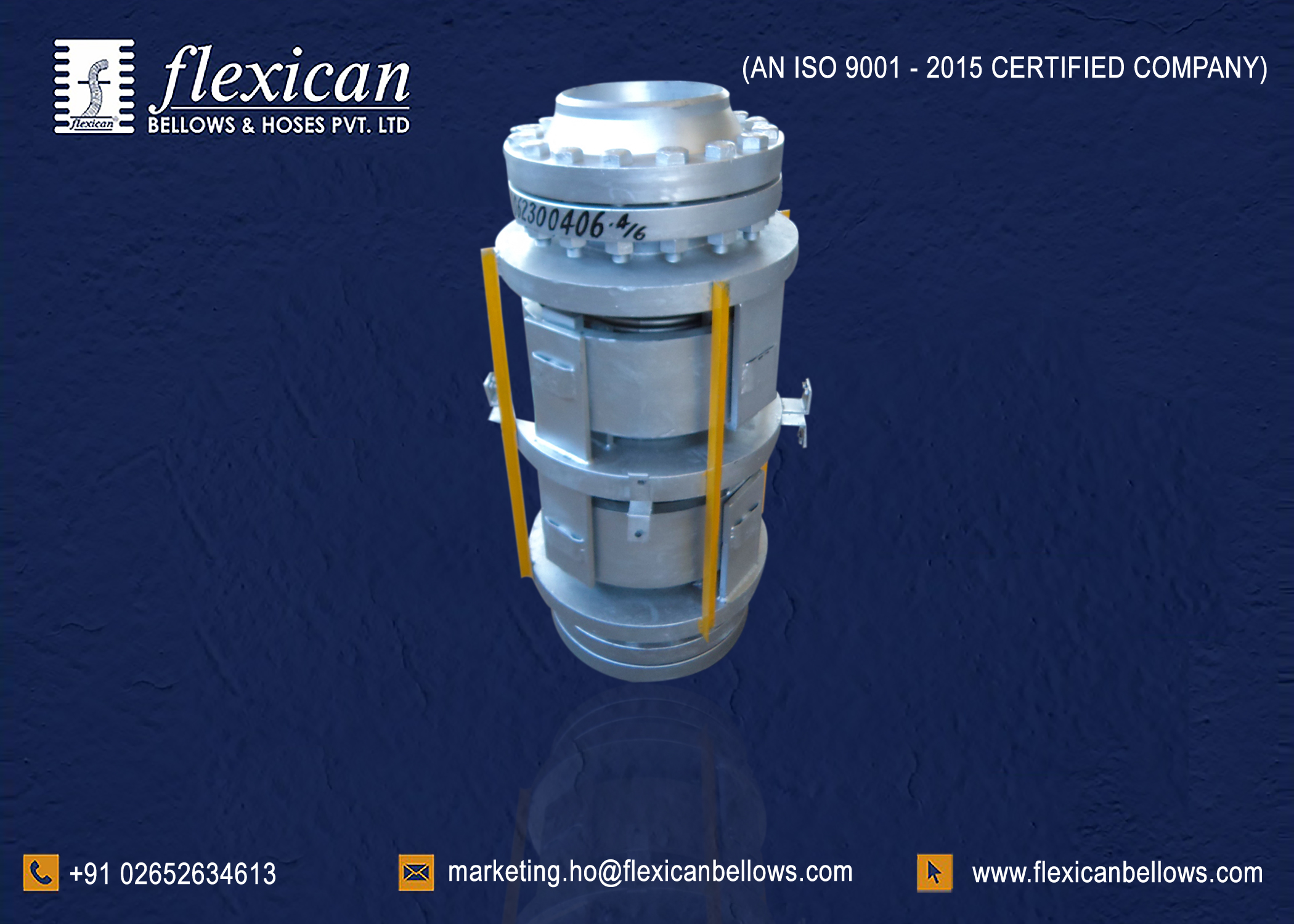 This type of Expansion Joints is normally used where a change of direction occurs in a run of piping and pressure thrust to be absorbed.

Pressure Balanced Expansion Joints are devices which produce no pressure thrust forces in the piping system on the main anchors. In addition to eliminating the pressure thrust, the expansion joint can accept axial compression, axial extension, lateral and angular movements. The balancing thrust is created by using balancing bellows.

Pressure Balanced Elbows are metal expansion joints which can consist of a single or double bellows in the flow section, and a balancing bellows of equal area on the backside of the elbow. Tie rods attach the outboard end of the balancing bellows to the outboard end of the flow bellows. Under pressure, the tie rods are loaded with the pressure thrust force. If the flow bellows compresses in service, the balancing bellows extend the same amount without exposing the adjacent anchors to pressure thrust forces. However, the spring forces associated with bellows movements are imposed on the adjacent equipment. A pressure balanced elbow type expansion joint can accept axial compression, axial extension, lateral movements and very limited angular motion. 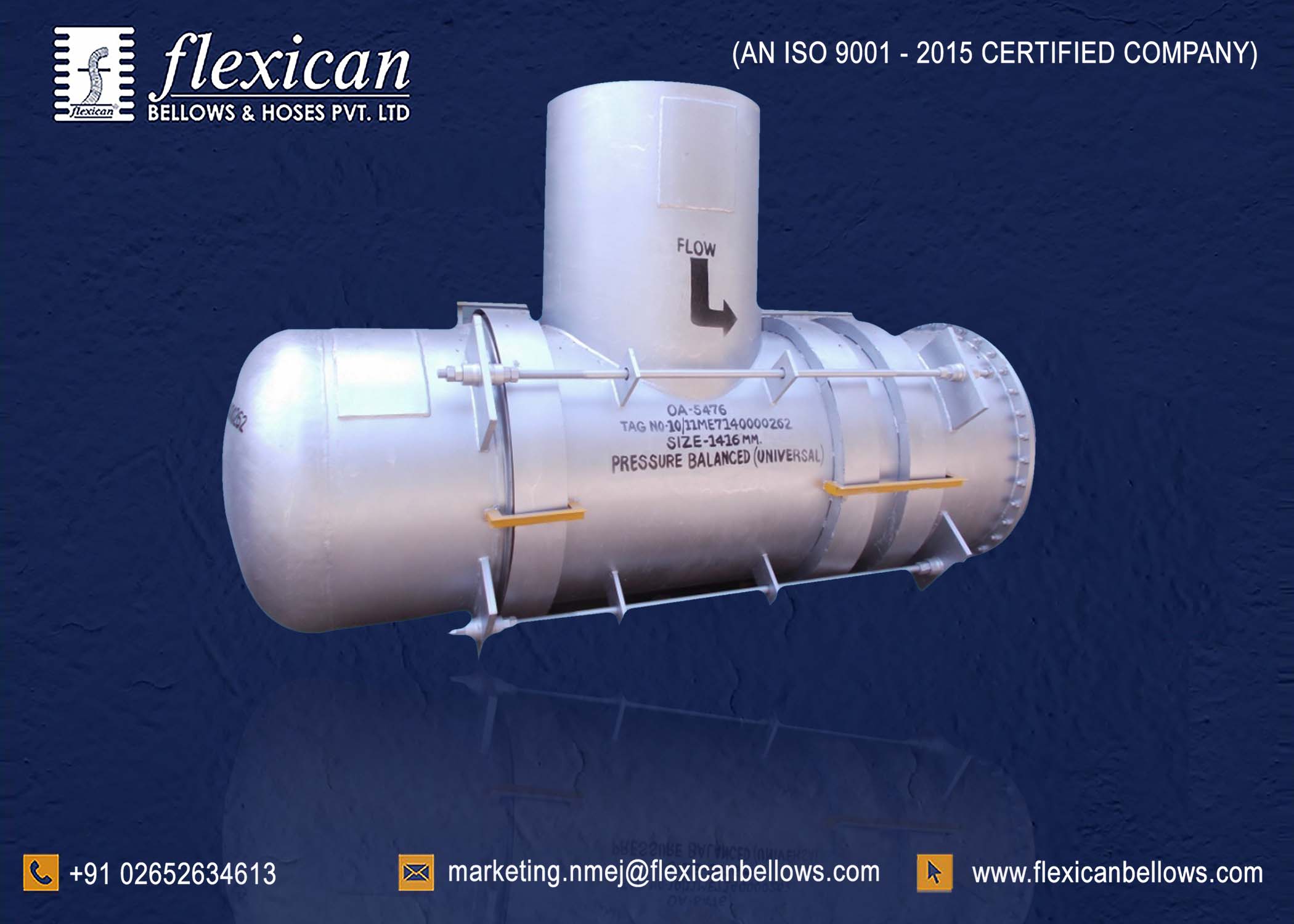